After Bri and Chris drove off on their tour bus at the end of the first (and last?) season of Bachelor Presents: Listen to Your Heart, we weren’t sure when exactly we would write our next post for our dozens of readers. After all, no one knew if or when Clare Crawley’s Bachelorette season would start filming. Today, nearly a month later, we still don’t know. But, we’re writing a post for perhaps the best of reasons – the franchise has named Matt James as its first ever Black lead for its flagship show, the Bachelor.

Great idea for a post by Victor and, I suppose, long overdue idea for a lead from the Bachelor. It is nice to be able to discuss the show and race without focusing on “the time Hannah Brown said the N-word” or “the time Becca K’s fiance posted about blue lives.” Should you so desire, there’s a pretty emotional discussion of that on this podcast between Becca K and Rachel Lindsay.

Rachel in general has been out and about reminding the world that this show has only just started to address some of the many real problems it has with race. And she’s been so busy she has not accepted our invitation to join the Right Reasons Round Table. Oh, and I suppose a disclaimer that should go without saying: this should not be the only place you go for a discussion of race in America. This is barely an adequate place to go if you want a discussion of the Bachelor.

Okay, take it away, Victor. 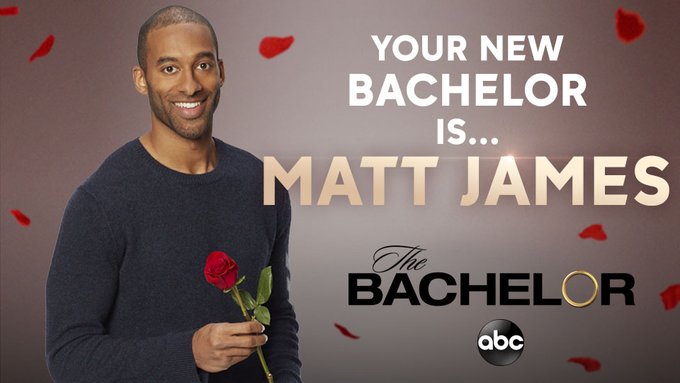 Previously known to the most hardcore of Bachelor Nation as Tyler Cameron’s running buddy in New York (and I guess to hardcore Wake Forest Demon Deacon Football fans as one of his teammates), Matt will be the first Black lead in the history of a show that has graced our screens since 2002. Since then, the show has anointed 24 men as the show’s lead, their complexions ranging from “kinda white” to “really white.” But in those 18 years, America has elected its first Black President; our Chief Justice John Roberts has declared racism to be a thing of the past; and our nation then elected a President in 2016 who has done more to improve the lives of the Black community than anyone since Abraham Lincoln (don’t fact check me George). Still, after all that, the Bachelor franchise chose a white guy with an emotional age of about 16 and who still lived with his parents as the lead on its most recent season (bypassing an obviously more compelling Black lead – more on that later).

But then something changed. The filmed murder of George Floyd by a Minneapolis Police Officer again forced the nation to confront its structural racism and the persistence of police brutality against Black citizens. Weeks of (mostly) peaceful protests resulted in millions changing their social media profiles to a black box for a day (including Chris Harrison), countless corporations to task their PR departments to release anodyne statements about recognizing that Black lives matter, and, hopefully, some changes that are actually meaningful. In the wake of all of that, you would be right to think that Matt James being named as the lead is simple opportunism/damage control from ABC/Warner Brothers. You would be right to surmise that the company risked permanent damage to its brand if it ignored the country’s awakening and named Brent, management consultant, as its next Bachelor. But despite all of that, the show naming Matt James as its first Black Bachelor is something meaningful and something worth celebrating.

It matters because the Bachelor isn’t just another television show. The White House occupant, notwithstanding his recent fascination with the show “Law & Order” for whatever reason, is OBSESSED with the Bachelor (and the ratings it generates). The show drives water cooler conversations (back when we went to work and congregated around water coolers while respiring on each other); the show drives pop culture trends; and the show now has an extremely long tail of cultural relevance thanks to Instagram. For the millennial generation now driving and defining our nation’s culture, the Bachelor has contributed to that generation’s conceptualization of love, pursuit, consumerism, and gratification.

In 2011, the production company named Brad Womack as the Bachelor lead, for the second time. Apparently, America must have been so devoid of men of color worthy of being a lead that production chose a white man who had already starred as the lead and didn’t choose anyone the first time. His cast looked like this. 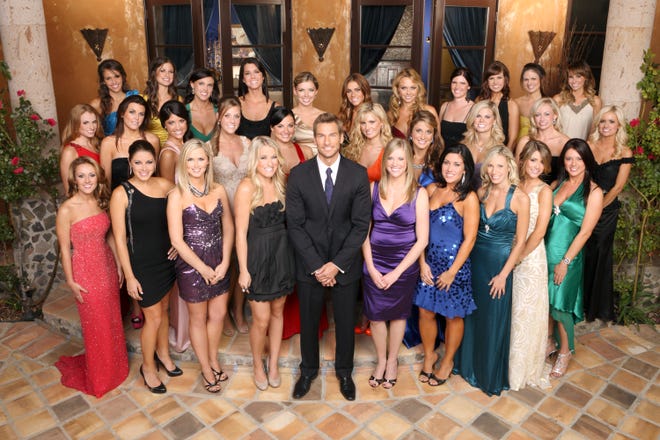 Brad ended up dumping his final choice soon after the show ended – I know you must be shocked.

The following season, production chose Ben Flajnik as the lead for the show. How could they not? His credentials were stellar. He went to the University of Arizona (no shade) and was trying his hand at being a winemaker (this turned out to be a failure). Also notably, he was a white. This was his cast. 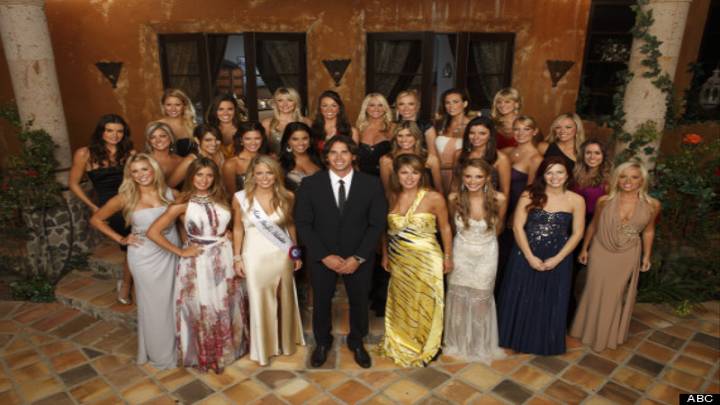 The diversity among the various shades of spray tans was something else.

Some potential Black contestants then sued the show for racial discrimination. While the suit was dismissed, it served as a bit of a wakeup call for the show. It started adding more racially diverse contestants to the cast at the beginning, but they never got far. And it went like this for multiple years. When asked, the show delivered platitudes about diversity but commented that POCs didn’t make it far enough in the show to be considered as the lead. These were, of course, dumb excuses because they ignore the factors that contribute to POCs not making it far. The franchise didn’t select leads that would be drawn to POCs and didn’t push story arcs for POCs in the same way they push arcs for “dramatic” white contestants. It also ignores that the franchise could pick anyone to be the lead. How could we forget this nonsense?

But even a bumbling franchise could catch lightning in a bottle – and that’s what happened when it stumbled upon Rachel Lindsay, who first appeared in Nick Viall’s season of the Bachelor in 2017. Her polish and charisma so far outshone her castmates that production had no choice but to pick Rachel as its first ever Black Bachelorette. Slightly-down ratings notwithstanding, she became the show’s greatest Bachelorette.

There’s a saying out there about going Black and not going back – that saying does not apply to the Bachelor franchise. The show followed up Rachel’s season by choosing another white man to lead the Bachelor, Arie Luyendyk Jr. (at most, the second most accomplished person named Arie Luyenduk). Arie Jr. last appeared on the show in 1987 (is that right George? fact check please). And to make things worse, in 2019 – the franchise passed over Mike Johnson to select the aforementioned 16 year-old Peter Weber, a guy who would probably go to a Thai restaurant to order the mild version of Pad Thai. Peter’s season was a predictable disaster – its most exciting moment involved a conversation between Peter’s mom and dad.

So against that entire backdrop, Matt James is a big deal!

Is it as big of a deal as police reform or the larger cultural and political shifts among mainstream America? Of course not. But changes in how cultural touchstones portray Black lives do matter. Small, but perceptible, cultural shifts led to Brown v. Board and later, the Civil Rights Act; small tremors in how the nation perceived gay rights led to US v. Windsor. And because the Bachelor carries cultural resonance, things like this MATTER.

So who is Matt James?

Funny story. Victor totally sent me a well-reasoned and exceptionally detailed discussion of the first Black Bachelor and then wrote in the line “so who is Matt James?” followed by this:

Yeah, so, here goes? Matt James is known for being Tyler C’s friend. Tyler C is a really good-looking former college football player with nice abs. Matt James is those things, but also Black. Apparently Tyler C, Matt James, and Hannah Brown all quarantined together in Florida for a while. They generated content for the gram and the tik tok and other things I don’t actually know about because my only social networks are linkedin and friendster.

Matt James hails from Raleigh-Durham, NC (hence the 919 in his MattJames919 Instagram handle). Matt James played football at Wake Forest, known for famous football players Chris Paul and Tim Duncan. Just kidding, known for Tyler Cameron and Matt James. But while Wake is not a football powerhouse, you have to be pretty good to suit up in the ACC and lose to Clemson and Florida State while sometimes beating Duke. Hey!! When I think college football, I think ACC! Matt James apparently got a tryout for some NFL teams that did not pan out, and then went to PNC bank to be a commercial real estate analyst. Almost-NFL-player and random-finance-bro are two paths to the Bachelor for sure.

In NYC Matt James and Tyler C started a running group to, I suppose, prepare Matt James to be the center of many women’s attention as the Bachelor.

Last Thursday was an incredible run! The turnout was outstanding and we all got better together! Let’s keep it going! Tomorrow at 6:30pm we will be back in front of Tavern on the Green in Central Park for another group date run! Please be stretched before 6:30! Tomorrow I’ll be sharing how I handle adversity and how I got myself out of one of the toughest points in my life. We also will have the link of all the photos from Thursday’s run on the @abcfoodtours website for you to have. Love y’all and can’t wait to get better together tomorrow!

They also started something called ABC Food Tours that you can read about online and also probably will hear a ton about on the show whenever it or restaurants come back. I’m guessing if you are another nonprofit in NYC devoted to helping kids get to restaurants you are about to be crowded the fuck out by the one with all the hot famous people. ABC Food Tours were Matt James’s idea and you can read about how it happened and what it is here.

For sure, the portrayal of Black men in American media has evolved from the Birth of a Nation days. But even in the 21st century, media representations of Black men are often distorted. Black men are underrepresented generally, but overrepresented as proxies for criminality and poverty. Even media’s positive portrayals of Black men are often limited to their physical (sports) or entertainment value. Mainstream portrayals of Black men as complex, three-dimensional characters worthy of adulation and love are sparse. We think that the franchise got it right in picking Matt, but, more importantly, we hope they do the work necessary to get it right in showcasing Matt. Given how long this has taken, the audience deserves a portrayal that’s nuanced, genuine, and, most importantly, representative. A representation of love that evolves to one more inclusive across all racial, body type, and social dimensions is one that’s worth celebrating – especially if it means an end to a representation of love among a diverse group of aspiring Instagram influencers.